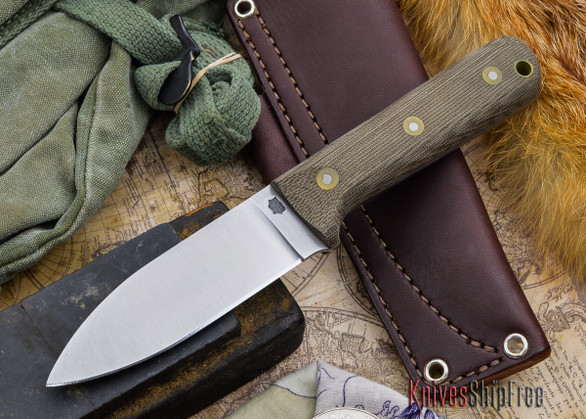 The Genesis is a flat ground bush knife that really likes to work. With features such as Micarta or Ironwood scales, a bead blasted finish, and heavy duty hardware, it'll get the job done for you no matter what the circumstances. L.T. Wright Knives takes the time to do the little things: making sure the epoxy isn't just on the scales, but around every bit of the hardware, including the threads of the brass nut, to ensure a completely sealed scale set.

The Flat ground is polish on the whole surface to make sure there is no drag when cutting. This is a great finish to the 1/8" A2 tool steel, it makes for a superior edge. The thumb scallops on each side allowing more comfortable control doing close up work. Whether you're getting a tinder bundle scraped off a branch or striking a ferro rod off there, the 90° spine will allow you to save the blade for fine cutting tasks.

The Genesis also includes a premium American made leather dangler sheath with a slot for a 3/8" fire steel.