I'm sure you can imagine the stories I hear about what some folks do with their knives. Just recently, in fact, a guy called to say that he was sadly disappointed with a Fällkniven he'd bought from us -- the tip of the knife broke off as he was prying a brick out of an old sidewalk. 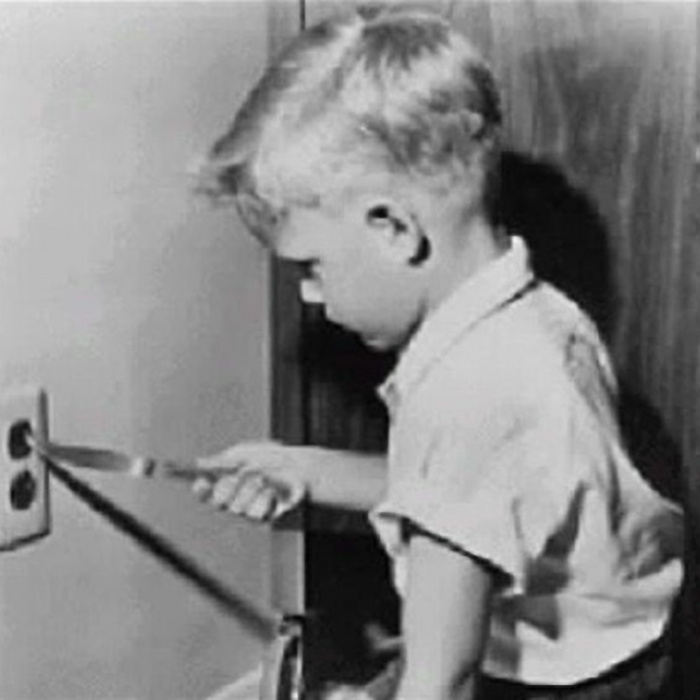 And that got me thinking about the stupid stuff that people do with knives.

Now before you get the idea that I'm immune to fits of stupidity, allow me to disabuse you of that notion. A few years ago I was working on a carpentry project in our packing room, and a piece of wafer board needed a wee bit of cutting to fit around a post. Instead of using a saw (the right tool for that job), I reached for a custom knife that my wife designed and had made by a well-known custom 'maker.

Wafer board, as you may know, is chock-full of debris and chunks of wood going in all different directions. Even a very sharp custom knife wouldn't cut it, so I took an axe handle and beat on the spine of the knife .

I got the notch I wanted. I also ended up with a badly deformed custom knife.

Sheepishly, I went back to the 'maker and asked if he could fix it. He did, and when he returned it he insisted that Wendy keep it the heck away from me. He also told me to never do that to one of his knives again.

I guess we all do stupid stuff from time to time. Now, off the top of my head, here are a few things to avoid doing with your knives.

Don't use your knife as a prybar.

I suppose that's pretty obvious (or it should be, anyway). What I'm really saying is, don't use your knife for anything other than what it's designed for .

We all do things with our knives that we know we shouldn't -- usually because our knife is handy -- but we shouldn't be surprised at the resulting damage. Often we get away with it, at least for a while, but a broken tip or a chipped edge is inevitable.

Don't chop when you should cut.

You've seen them on the Internet -- pictures and videos of expensive knives with half-moon-shaped chunks missing from their edges. Most of the time, that kind of damage is the result of trying to chop through the leg bone of a chicken or some thin twig or branch.

I'm no expert on the physics of it, but I do know that chopping something that isn't stable -- no matter how flimsy it may be -- puts asymmetric (uneven) stress on the edge of a knife. Even a great knife can fail under those conditions.

I've seen it in large knives and small knives, knives from custom 'makers and knives from big manufacturers. It's just a stupid thing to do with a good knife.

Don't clean your knife in the dishwasher.

Dishwashers use high heat and very aggressive chemicals to clean food off of dishes -- none of that's good for your knife. Besides, imagine all of those abrasive bits of food and gunk pressure washing your knife blade. Is it any wonder knifemakers cringe whenever someone even mentions dishwashers?

Don't work above your skills or beyond the limits of your knife.

This may be the most common "stupid knife trick" we know of. It abuses your knife and can be dangerous for you.

Sure, an expert may be able to baton a pocketknife through a piece of wood and end up with a pile of split kindling. But if you don't know what you're doing, you can break your knife or, even worse, you'll have to stop what you were doing to control some stupidity-related bleeding.

It's ok, even admirable, to practice new skills and get the most out of the tools you have. Just make sure that you know what you're doing (and that you have the right tool for the job).

When your stupidity reflex overcomes your common sense and you're left holding a damaged knife, resist the urge to throw it on the scrap heap -- remember, many knifemakers will be happy to fix it for you. It's usually not free, but I've seen some pretty dinged-up knives come back as good as new.