There's no single answer to this question. Each knife is different.

If the pivot on your brand-new knife -- whether it's a traditional pocketknife or a modern folder -- feels stiff or gritty, that's not uncommon. Usually it's a sign that it needs some break-in time. How long that'll take will vary from knife to knife, but we'll offer a few general guidelines.

A folding knife is a mechanical device, so its contact surfaces will take time to "mate" -- regular action will "polish" the surfaces. The process probably won't take long, and you can help it along by repeatedly opening and closing the blade (or blades).

Then again, you could just use your knife and it'll happen naturally.

During the break-in period, don't lubricate your knife.

When a folding knife is assembled, the 'maker lubricates its pivots with graphite powder, oil or light grease -- usually a very small amount, to avoid interfering with the break-in process.

If your new knife is stiff or sticky, you might be tempted to put some oil on the pivot immediately -- but don't do it. It may ease the action of the joint, but it'll also postpone (or prevent) natural break-in.

Give the pivot surfaces time to mate naturally. There will come a point when you'll notice your knife become smoother -- we can't say how long, but you'll feel it.

That's when you can add a drop or two of light oil. (We're big fans of Benchmade BlueLube, by the way)

A word about adjusting the pivot... 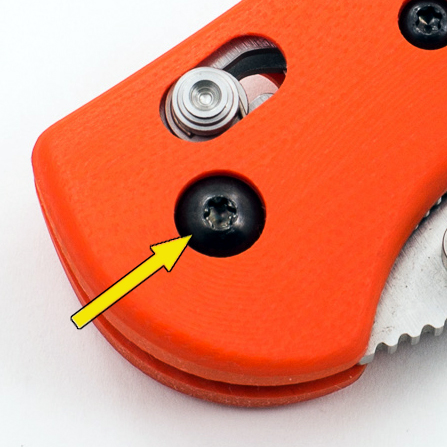 Most every modern folding knife has an adjustable pivot. Using a Torx driver or a hex key, you can tighten or loosen the pivot screw (shown on a Benchmade, right), adjusting the action of the knife to suit your preferences.

It's a great feature, of course. During the natural break-in period, however, you may want to wait a while before making adjustments.

A new folder can seem tight, when in fact it simply needs a little use to operate smoothly. You may be inclined to loosen the pivot screw to "fix" a problem that isn't a problem at all, and in the process you'll only be delaying normal break-in.

We encourage you to resist the urge to adjust the pivot right away. Just like waiting a while before applying lubricant, give your new knife some time to break-in naturally before fussing with the tension of the pivot.

Trust us, in the long run it'll be worth the wait.

(Don't have a Torx driver? Check out the Benchmade BlueBox tool kit.)