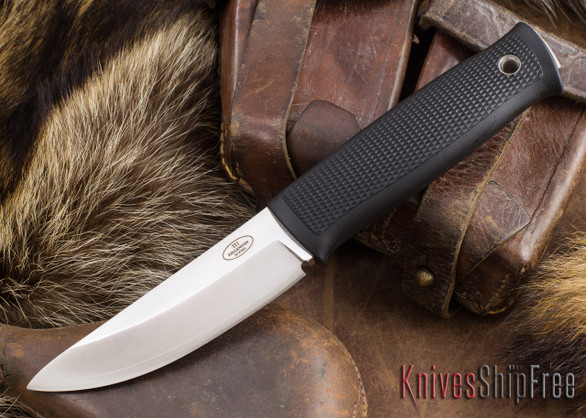 This is Fallkniven's first true hunting knife, built upon the experiences from centuries of knifemaking in Sweden. The strong, straight and very handy knife dates its origin from the ancient times of classic art of North-Scandinavian knife-making. Due to this, it lacks a standard fingerguard but still the grip is very safe since the handle is ergonomically shaped and made of tacky Kraton rubber with a textured pattern. With a handle this shape, you should preferably be an experienced hunter or outdoorsman for safely handling such an advanced knife as the H1 Hunting Knife.

The design of the H1 blade is special and there might be reasons to comment on its shape. First of all - a hunting knife may look very different and still work very well - in many respects it depends on the fellow who actually holds the knife how it will perform. If you don´t know how to place the correct incision into game, it doesn´t matter what kind of knife you´re working with, it usually ends up in bad cuts, hair on the meat, thru-cut body membranes and blood all over the game, including yourself. But - the combination of a skilled hunter and a well-designed knife is unbeatable! The incisions are well placed, the game is clean and hair only on the outside, no cuts into the meat etc.

The optimal hunting knife looks like mod. H1! It´s rubbish to say that hunting knives should have blades at lengths of 2-3" - we say that the perfect length is around 4-5", just take a look at the equipment of a professional butcher! But the length has to be combined with a design which offers a long, effectiv skinning edge and, which is very important, a tip which is shaped for offering a penetration performance as - a knife has two functions, the edge and the tip. The tip of this knife is designed for penetrating the hide without cutting into the meat when you start skinning your game.

Mod. H1 will for sure be your first choice, everything on this knife is matched for maximal operational capacity in many different situations. The strong, tough steel, the 0.2" thick, convex-ground blade which is razor-sharp, the straight, ergonomically shaped handle in tacky kraton rubber, the extremely compact size. Among experienced hunters and true outdoorsmen the H1 Hunting Knife will become the obvious choice, the lack of fingerguards is no loss for those who can handle a knife.