If you're looking for a high-quality traditional pocketknife, Great Eastern Cutlery is a smart choice.

Though Great Eastern Cutlery has been around only since 2006, it's quickly earned a reputation for producing the very best pocket knives in the industry -- the quality speaks for itself. If you buy a Great Eastern knife, you will be pleased.

Owned by Bill Howard, chief designer at Queen Cutlery for many years, Great Eastern Cutlery brings 60 years of industry leadership to its products -- in other words, you can trust these guys to turn out top-quality knives. So if the tang stamp says Tidioute Cutlery, Northfield Un-X-LD, Farm & Field Tool, or Great Eastern Cutlery, rest assured that it's one of the best made-in-USA knives you can buy.

Why does Great Eastern Cutlery use the name "Tidioute" or "Northfield UN-X-LD" on their knives?

Great Eastern Cutlery operates in a part of the United States that carries a rich amount of knife history, especially in the cutlery companies that used to operate there over a century ago. Two of these classic names were revived by GEC in order to carry on their traditional way of producing classic pocket knives.

Tidioute Cutlery: These knives are beautifully made, but they are designed with function and practicality above beauty. The finish and the materials are practical, intended to be a working knife. The blades are satin-finished 1095 carbon steel, and the covers are durable material like cattle bone and ebony wood.

Northfield UN-X-LD: The most premium materials and finishes are reserved for this line. The handle covers feature exotic pieces of genuine stag antler and richly figured woods. The 1095 carbon steel blades are finished to a mirror polish, and the bolsters are finished with finer details such as fluting.

You may also find some GEC models marked under the following:

Great Eastern Cutlery: This self-named line from GEC features 440C stainless steel, the acorn shield emblem, and preferred materials such as elk antler, cattle bone, and hardwoods - all sourced in the U.S.

Farm & Field Tool: These are built solely to be hard-working, chore-tackling knives. The handles are made of extremely durable delrin, micarta, or acrylic. The rest of the knife is an all-steel construction with reinforced pins and 1095 carbon steel blades and backsprings.

KnivesShipFree is the largest Great Eastern Cutlery dealer in the world.

We chose to carry GEC knives because they offer some of the highest quality traditional slipjoint pocket knives you can buy.  they use top shelf materials, exotic handle materials (covers) and seem to have their finger on the pulse of the pocket knife consumer.

Their patterns are thoroughly traditional in their origin and are actually made the same way they have been made for more than a century.

***Please note, the pocketslip promotion mentioned in the video has changed. We now offer a free buffalo leather slip with every GEC knife - or you can choose to swap it out for a discounted Mainstreet Pocketslip ($10).

What does the six-digit number on my GEC knife mean?

One of the cool things about Great Eastern Cutlery is that there's a seemingly endless selection of patterns and blade styles. Keeping track of that many variations can get complicated, though, so GEC came up with a six-digit numbering system. 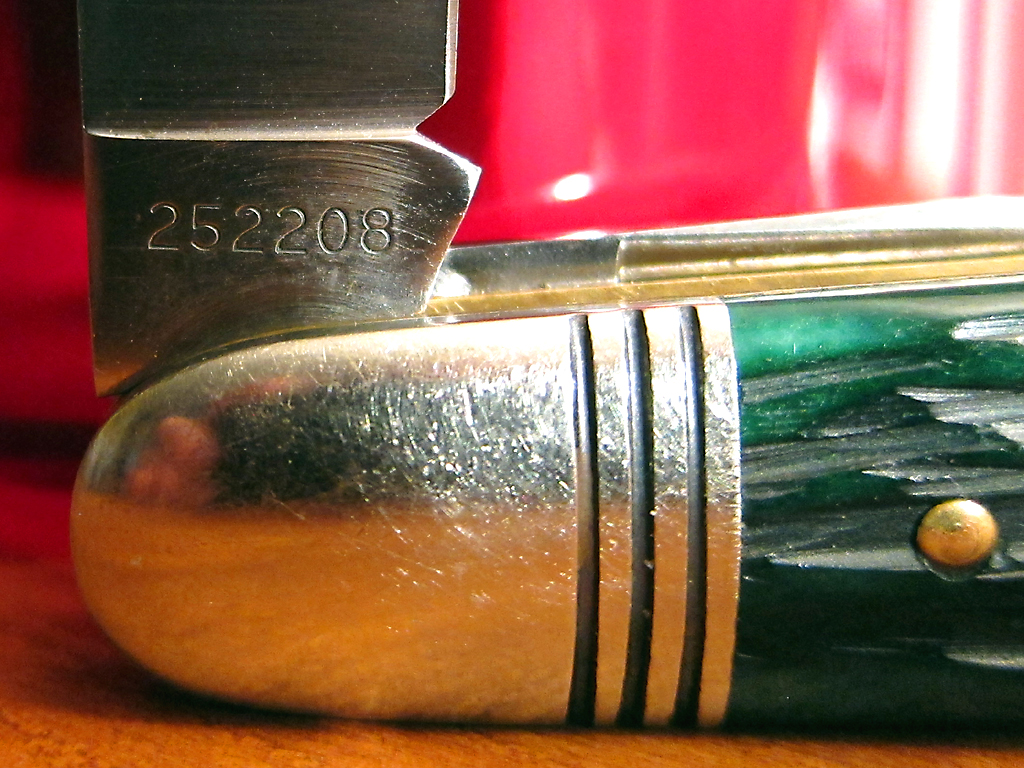 You'll find this number stamped on the tang of one of the knife's blades (at the base, near the pivot). The first two digits denote the Great Eastern Cutlery pattern number. The next digit identifies the style of the main blade:

The fourth digit of the code indicates the total number of blades, and the final two digits record the year the knife was manufactured.

In the photo above, the number  252208 appears on the tang of the main blade. Breaking the code, we see that this is Great Eastern Cutlery pattern #25, with a "regular spear" main blade and a total of two blades, made in 2008. 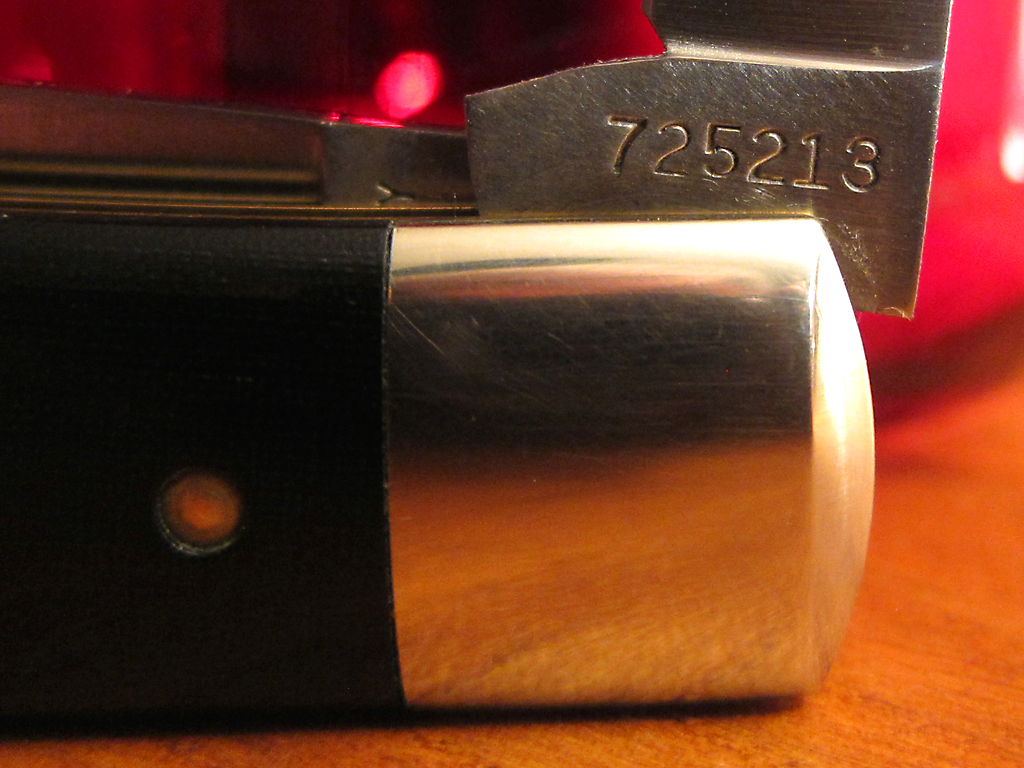 Our second example (left) has 725213 stamped on the tang of the smaller blade. That number reveals that this is Great Eastern Cutlery pattern #72, with a "drop point/skinner" main blade and a total of two blades, made in 2013.

This code can be especially helpful if you're a Great Eastern collector, or when you're shopping for a knife similar to one you've seen, or if you own a GEC knife and simply want to confirm exactly what you have.

Where are Great Eastern Cutlery knives made?

Great Eastern Cutlery knives are proudly made in the United States of America. The company is headquartered in Titusville, Pennsylvania.

Is there a way to keep my GEC knife from getting scratched up in my pocket?

Yes, as a matter of fact, there is -- it's called a  pocketslip.

We know that when you invest in a Great Eastern Cutlery knife, you want to protect it. Our pocketslips protect your knife from keys, loose change and debris. More important, it distributes the weight of the knife in your pocket.

That may sound silly -- after all, a knife doesn't weigh that much -- but trust us, it's a big deal. You won't realize what a difference it makes 'til you try it.

The beauty of a pocketslip is its simplicity. It's a leather envelope -- drop your knife inside, slide it into your pocket and it disappears. When you need your knife, a quick squeeze of the sides and your knife is delivered into your hand.

It's so important, we include a buffalo leather pocketslip with every GEC knife you order - for free!

Your GEC knife has a v-bevel which means a flat sharpening medium like a DMT diamond stone setup or the KME Sharpening System is going to be a perfect solution. GEC's steel is expertly heat treated so that it will take a fine edge the way a pocket knife is supposed to.

I'm having a hard time opening my pocket knife -- any tips?

It's true that some slipjoint pocketknives have a harder "pull" than others. Not everyone gets the hang of it right away.

Remember, too, that all folding knives have a natural break-in period and will become friendlier after time and use.

Beyond that, we'd like to tell you that we have a super-secret trick to make it easy, but the best advice we've found on the subject comes from almost a century ago. 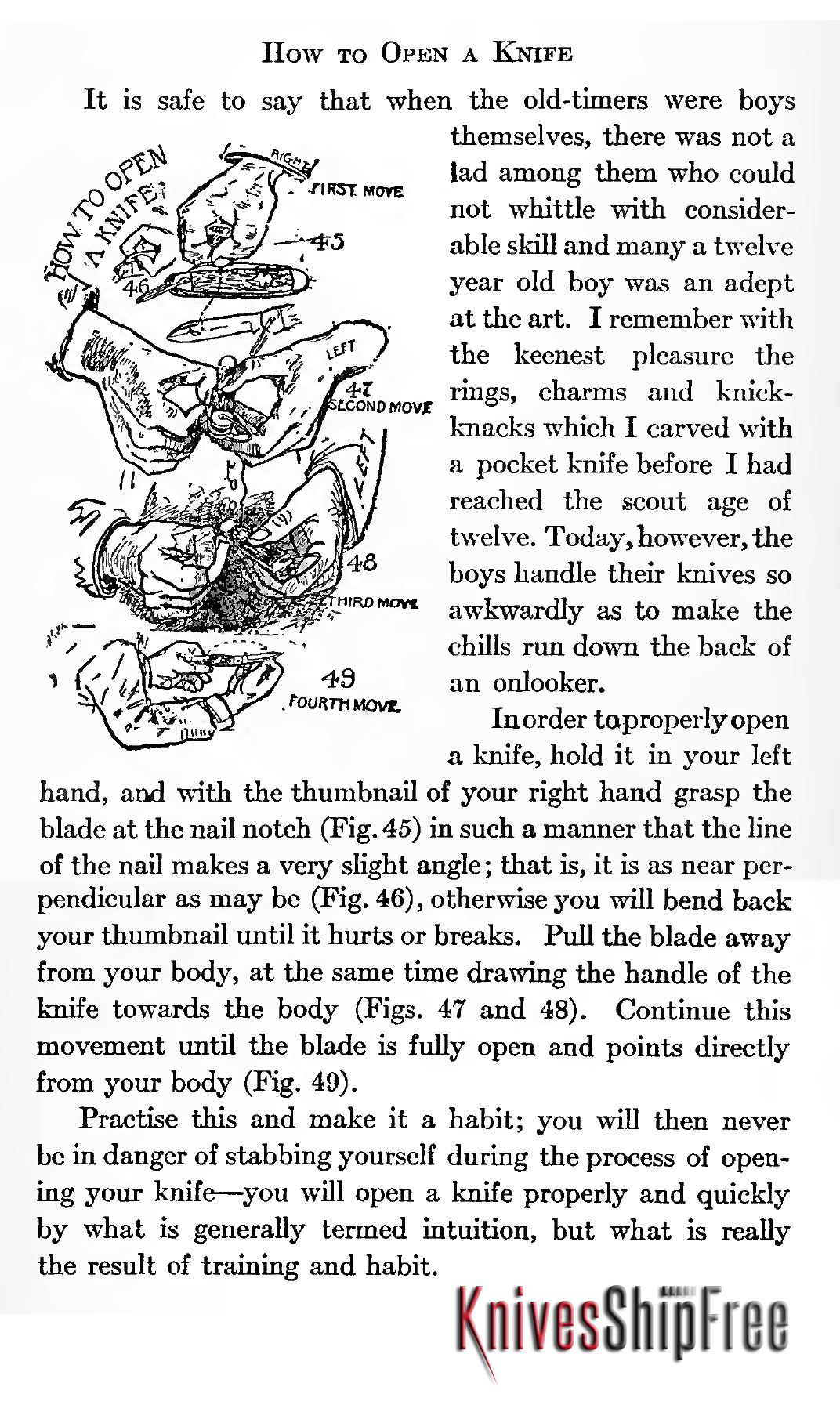 (from The Book of Camp-Lore and Woodcraft by Dan Beard, 1920)

It happens to most of us at some point -- one of our favorite slipjoint pocketknives gets really gunked-up.

Maybe it got caked with mud somehow. Maybe we dropped it in the yard and it got rained on before we found it. Maybe we used it on a hunting trip and failed to clean it up afterward.

However it happened, relax -- it's not difficult to bring a gummy pocketknife back to life. Here's how.

Here are a few more tips that may help.

That's it. Take your time to do this right and you'll be amazed at how effective it is.

Taking the mystery out of patina, rust & 'stainless' steel

Here at KnivesShipFree.com, among the questions we’re asked most often are, “Why did the blade of my new knife turn gray the first time I used it?” and “Why is there rust on my stainless-steel knife?”

For the sake of simplicity, we can say that knife blades are made from either stainless steel or carbon steel. The fundamental difference between the two is in the amount of chromium added to the iron-based material -- a steel with at least 13% chromium content generally is considered "stainless."

Carbon steel -- like the 1095 used by Great Eastern Cutlery and the A2 used by Bark River Knives, to name two -- naturally is more prone to something called “oxidation,” the most damaging form of which is rust. Another type of oxidation, the kind that darkens a shiny new knife blade, commonly is called “patina” -- and it’s actually a good thing.

Before the advent of mass-produced stainless-steel knives, virtually all blades were carbon steel. When a knife developed a patina of gray or even black, the change in color simply was an indication of use. Some still consider patina a sign of character – both of the tool and the owner.

Most important, patina forms a sort of protective barrier to more sinister oxidation. It tends to fill-in microscopic imperfections in the surface of the steel, making it more difficult for rust to take hold. In fact, many savvy (and impatient) knife owners intentionally “force” a patina on their knives by cutting onions, potatoes, pineapples or strawberries.

Of course, it’s possible to remove patina with fine metal polish. The question is, why would you want to?

With that understanding, then, let’s talk stainless. One of the most common misconceptions among knife owners is that “stainless steel” means “rustproof steel.”

It doesn’t -- rust-resistant, maybe, but not rustproof. Although nasty orange oxidation has to work harder to develop on stainless steel, it’ll show up eventually if a knife isn’t cared for properly.

Allowing food residue, blood or moisture to sit on the blade is just begging for rust (and permanent damage), so the simple practice of cleaning a knife after each use -- and checking that it’s dry before sheathing it -- is common-sense maintenance. It’s also a good idea to wipe it down regularly with a light oil, but make sure that it’s a non-detergent oil and, if you use your knife to cut food, that it’s non-toxic.

Carbon steel or stainless, no matter what you paid, your knife is an investment. You don’t have to pamper it to make it last a lifetime -- all it takes is an ounce of prevention.